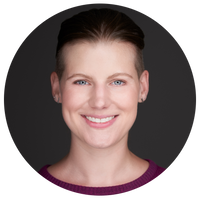 After graduating with honors from the University of the Arts in 2013, Kristen began her career as a freelance illustrator. It quickly became clear to her that she would need a “real” job while pursuing her artistic pursuits. Having a great love of books, she took the opportunity to work in a bookstore where she could share her passion for literature. A year later she began work at a local library and as an assistant editor at Fox Chapel Publishing where her fervor for organization was a great asset.

In 2017, Kristen’s husband, Jim, was offered a job as a music teacher. They packed their bags and moved from Pennsylvania to New Jersey. Although very sad to leave her loved jobs behind, Kristen looked forward to the possibility of a new venture. Through luck and chance she was offered a position at Turning Pointe Financial where her unique combination of organizational and creative skills can flourish.

Kristen and her husband live with their infant son, Finn, three cats, and a dog. Her favorite books include, but are not limited to, The Master and Margarita by Mikhail Bulkagov, Pale Fire by Vladimir Nabokov, and Swamplandia! by Karen Russell. She plays the cello and greatly enjoys her daily walks with her dog.